History of the Hershey Cemetery

When founding the community of Hershey, Milton Hershey planned for most of the necessities and amenities needed to serve its residents. He provided for the community’s housing, schools, recreation and transportation. One service he didn’t immediately establish was for the deceased. Hershey had no cemetery. Most of Derry Township’s churches maintained graveyards, but for the first 15 years of the town’s existence there was no community cemetery.

It is not surprising that Hershey had no cemetery in its early years. Hershey was a “young” community, not just because of the age of its physical structures, but its population was young. While there were older residents living in the area prior to Hershey’s establishment, the average age of Hershey residents was younger than those in the neighboring communities. Hershey also promoted itself and was written about in outside publications as a healthy place. The local weekly newspaper, the Hershey Press, regularly proclaimed the virtues of Hershey, including its freedom from sickness and disease. Why would such a young and healthy town need a cemetery? While Oglesby Paul, the landscape architect who designed much of Hershey’s landscaping, had drafted a plan for a community cemetery some time before 1915, it was not immediately constructed.

By 1916, however, Milton Hershey had begun to consider the need for a cemetery in Hershey. His wife Catherine, who had long been concerned about the lack of a cemetery in Hershey, died March 25, 1915. Her body was retained in Philadelphia at Laurel Hill Cemetery; Milton Hershey had fresh flowers placed at her vault several times a week. His father, Henry, died in 1904, and his mother was nearing the end of her life. Milton Hershey desired to have his loved ones interred in the same cemetery, so he decided to create his own.

Plans for construction of a cemetery soon began in earnest. Milton Hershey donated land approximately one mile north of Hershey overlooking the Swatara Creek basin. Oglesby Paul’s plan was resurrected, and additional surveys and drawings were made based upon its design. Paul had designed the cemetery based on the “lawn plan.” This was a popular type of cemetery at the turn of the century featuring open spaces. This uncluttered and orderly landscaping emphasized the harmony of the cemetery as a whole, rather than allowing for the individual tastes of lot owners. The roads and paths in the Hershey Cemetery followed the contour of the land and featured circular sections connected by paths. Shrubbery and other plantings were specifically designed and planned. In a few years, extensive rules would be adopted to govern the appearance of individual lots.

Next, Milton Hershey made plans for a Hershey monument to mark the burial place of his family, except for his sister whose grave could not be found, and eventually for himself.  For this, he commissioned Haldy Marble and Granite Works in Lancaster, Pennsylvania. While they tried to convince Milton Hershey to erect a mausoleum, he instead chose to erect an understated marble monument. The monument simply reads “HERSHEY” and four grave markers rest on the ground below it.

World War I delayed completion of the cemetery, but the first burials occurred late in 1918. These first interments were due to the influenza epidemic which struck Hershey and the rest of the world in 1918 and 1919. The first burial was a Hershey Industrial School student, Charles Swartz, who died from influenza. After completing construction of the Hershey monument, Catherine Hershey’s body was moved from Philadelphia and interred in 1919. In March 1920, his mother, Fanny Hershey, died, and then in October, Henry Hershey’s body was moved from the Hershey Meeting House graveyard to the cemetery.

While the cemetery was first used in 1918, it wasn’t officially organized as an operating business until 1923. In March 1923, a company was established to manage and maintain the cemetery. Milton Hershey officially transferred the land for the cemetery on July 31, 1923 for the price of one dollar. He was the primary stock holder with 600 shares. William Murrie, Ezra Hershey and John Snyder each had ten shares. The Greenwood Cemetery in Lancaster, Pennsylvania served as the model for how the cemetery would function as a company, as well as for its rules and charter. 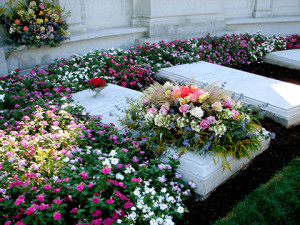 Flowers were placed at Mr. Hershey’s gravesite during the community’s celebration of his 150th birthday in 2007

The Hershey Cemetery operated as a modern American cemetery. Strict rules governed everything including the placement and size of lots, headstones, grave decorations and visitor behavior in the cemetery. Booklets informed prospective buyers not just of these rules but also with information regarding lot options and pricing. The cemetery was divided into sections, and each section was broken into lots. Sections were segregated for Protestants, Catholics and a section was reserved for Hershey Industrial School boys. Prices for lots ranged between 50 cents to $1 per square foot, and the standard size of a full lot was 20 by 20 feet.

The cemetery has continued to expand and evolve. New sections have opened as older ones have filled. Since the cemetery’s first burial over 90 years ago, a few sections have completely filled, but much of the cemetery is waiting to be developed. While future plans will likely diverge from Paul’s original design, the cemetery will continue to serve the population of the Hershey in years to come.

Schedule an appointment by calling (717) 520-1110 or Click Here for more information.
Cemetery Search
View the desktop version of this page